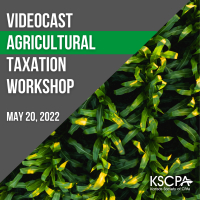 This workshop will help practitioners recognize unique tax opportunities and pitfalls for taxpayers in the agriculture industry.

This virtual workshop will help practitioners recognize unique tax opportunities and pitfalls for taxpayers in the agriculture industry. This workshop will give tax professionals a forum to discuss current issues affecting their farm and ranch clients.

Practitioners with a farm or ranch clientèle base; farmers and ranchers.

Learn key updates and strategies in farm and ranch taxation.

Roger A. McEowen is the Professor of Agricultural Law and Taxation at Washburn University School of Law in Topeka, Kansas.

Through 2015, he was the Leonard Dolezal Professor in Agricultural Law at Iowa State University in Ames, Iowa, where he was also the Director of the ISU Center for Agricultural Law and Taxation (CALT), which he founded. Under his leadership, CALT utilized no taxpayer funds in its operations and fully funded staff salaries and benefits, as well as office rent, equipment and supplies, and travel costs from funds generated by seminars and other education-related events and materials. At ISU he also introduced an agricultural law course into the undergraduate curriculum initially as an experimental course, ultimately building the course from the ground-up to almost 100 students in attendance by the spring semester of 2015. He was also the highest-rated speaker at the annual fall CALT tax schools every year through 2015. Before joining Iowa State in 2004, he was an associate professor of agricultural law and extension specialist in agricultural law and policy at Kansas State. From 1991-1993, McEowen was in the full-time practice of law with Kelley, Scritsmier and Byrne in North Platte, Nebraska.

McEowen also teaches an undergraduate course in agricultural law at Kansas State University and has been a visiting professor of law at the University of Arkansas School of Law in Fayetteville, Arkansas, teaching in both the J.D. and L.L.M. programs. He has also previously taught at Washburn Law School and the Drake University School of Law Summer Institute in Agricultural Law.

He has published scholarly articles in the Journal of Agricultural Taxation and Law, Indiana Law Review, Drake Journal of Agricultural Law, North Dakota Law Review, Nebraska Law Review, Monthly Digest of Tax Articles, Tax Notes, West's Social Security Reporting System, Toledo Law Review, Washburn Law Journal, Creighton Law Review, Agricultural Law Update, and the Agricultural Law Digest. He is the author of Principles of Agricultural Law, an 850-page textbook/casebook that is updated twice annually, and a second 300-page book on agricultural law. His Agricultural Law and Taxation Blog, part of the Law Professor Blogs Network, contains approximately 130 detailed and fully annotated articles annually and is the most widely read agricultural law and taxation blog online. In mid-2017, Prof. McEowen's new book, Agricultural Law in a Nutshell, was published by West Academic Publishing Co. McEowen also authors the monthly publication, "Kansas Farm and Estate Law." In addition, he co-authors Bureau of National Affairs (B.N.A.) Tax Management Portfolios on the federal estate tax family-owned business deduction and the reporting of farm income, and is the lead author of a B.N.A. portfolio concerning the income taxation of cooperatives. He is also the Editor of the Iowa Bar Tax Manual and Estate Planning for Farmers and Ranchers and Family Business Organizations, both Thomson/West publications.

Prof. McEowen conducts approximately 80-100 seminars annually across the United States for farmers, agricultural business professionals, lawyers, and other tax professionals. He also conducts two radio programs, each airing twice-monthly heard across the Midwest and on the worldwide web. In addition, his two-minute radio program, "The Agricultural Law and Tax Report," is heard each weekday by over 2 million listeners on farm radio stations from N.Y. to C.A. as well as SiriusXM 147. He also can be seen as a weekly guest on RFD-TV, where he discusses various agricultural law and tax topics with the RFD-TV hosts.

He received a B.S. with distinction from Purdue University in Management in 1986, an M.S. in Agricultural Economics from Iowa State University in 1990, and a J.D. from the Drake University School of Law in 1991.

He is a member of the Iowa and Kansas Bar Associations and is admitted to practice in Nebraska. He is also a past member of the AALA Board of Directors.